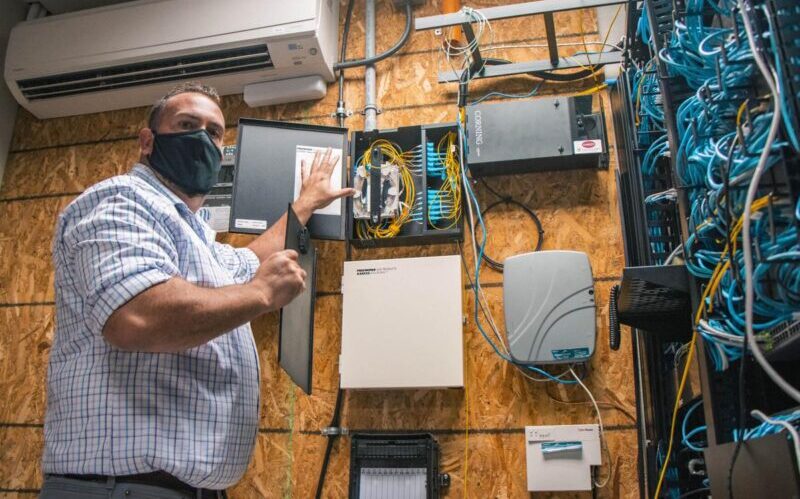 As the COVID-19 pandemic has pushed many activities, including school and work, to the online space, local governments, public and private organizations and internet and utility companies have made steps toward making the internet more accessible for those living in rural areas of the county and the state.

Installing broadband infrastructure is costly and time-consuming, and residents without internet need connectivity now. While planning continues for long-term solutions, these groups are working to put Band Aid solutions on the larger issue.

In late 2019, Lewis County Public Utility District, No. 1 received a $50,000 grant from the Department of Commerce’s Community Economic Revitalization Board to conduct a study to identify the need in the county for better internet service.

As part of the study, the PUD recently conducted a survey regarding internet connection in the county and found that although 97.7 percent of respondents in the county view the internet as an essential service, only 23 percent of households reported they had broadband internet.

The survey’s results were the first step toward a solution to broadband inequality, but the PUD’s role in regards to broadband is limited. State law prohibits public utility districts from providing retail internet service, however, they can operate telecommunication lines for internal needs and can provide broadband wholesale by partnering with a retail service provider.

Willie Painter, public affairs manager with the PUD, believes PUDs across the state would be more likely to invest in broadband infrastructure if they were able to provide retail service, but said there is also a viable business model in leasing out the fiber infrastructure to retail providers.

“One of the key problems is how current providers make the determination of who to serve, and by virtue of that determination, who not to serve. If no private telecoms want to serve a particular area, then those customers simply don’t have access. Many, if not all, of these determinations, are made based on profitability, not need,” Painter said.

Painter and Chris Walker with the Northwest Open Access Network (NoaNet) both estimated that it would cost upwards of $100 million to provide reliable internet for all Lewis County residents.

“Just from a capitalization perspective, the rural marketplace is really challenging. Associated with that is the desire for broadband to be affordable so the customer assumes, rightly so, that their broadband fee should be the same with their urban counterpart, yet the capitalization needed to have the broadband built to rural customers is extraordinarily more expensive,” Walker said.

NoaNet, founded in 2000 by Washington Public Utility Districts, was created to realize the economic benefits of broadband to unserved and underserved areas of the state.

“If the private-only market can’t or won’t solve the problem, then perhaps the Legislature should consider giving local areas like ours a choice by providing PUDs the ability to serve,” Painter said.

In the meantime, the PUD has teamed up with ToledoTel, an broadband internet service provider based in Toledo, to install “emergency wireless infrastructure,” or WiFi hotspots around the county.

Working toward long term broadband expansion, the PUD has submitted a $5.5 million broadband expansion grant proposal to the Washington State Public Works Board and should know if it is approved by the end of October. The proposed broadband expansion would follow along state Route 6 into Boistfort, passing by 800 to 1,000 PUD customers. It is estimated to take about three years to complete the building process.

The Lewis County Board of Commissioners approved two grants in August totaling $300,000 for emergency broadband internet expansion using COVID-19 relief funds. The county is working with internet service provider Breeze, which proposed a plan to expand broadband coverage in Lewis County by instaling point to point towers by the end of the year for $150,000.

The other $150,000 was allocated to the newly formed Lewis County High-Speed Education Network to expand broadband coverage for local school districts.

Breeze is working to install nine point-to-point towers in Lewis County, estimated to connect between 50 and 200 people. The towers should be completed by the end of 2020. Erik Martin, Lewis County manager, said that the tower locations were chosen based upon availability and proximity to customers.

“Now because of COVID-19, we’re really finding out where the issues are,” said County Commissioner Edna Fund. “There are grant funds but every county in the nation is grappling with this so it’s very competitive.”

“I think for Lewis County I would like to see broadband expanded out to as many areas as possible,” said Lewis County Manager Erik Martin. “I think the kids that are growing up here today, we don’t want to put them at a disadvantage by them not having something that many other places in that state or the country have access to.”

The importance of broadband is mentioned in the county’s five-year strategic plan. Martin said that people are starting to see broadband as an essential utility and the county is doing what it can to make sure the road to broadband expansion is smooth.

Lewis County School Districts have also had to make quick adjustments and expenditures to get kids connected to internet and their classes.

A “Proclamation of Need for Reliable, High-Speed Internet Access for Lewis County Students” has been signed by all superintendents of the school districts within Lewis County.

In Lewis County, all school districts have a portion of students within their district who do not have access to reliable internet or are living within a low-income household where internet service is not affordable.

Using the Centralia School District as an example, Superintendent Lisa Grant said the district used $15,600 in federal COVID-19 funds to purchase 400 hotspot devices that use U.S. Cellular service to connect students to the internet. However, cellular service is not available for all Centralia students so the district purchased 100 cradle points for approximately $45,300.

“We’re using multiple funding sources. We’re saving some money because we are not using a face-to-face learning model so we are using those monies. Also, we set some of our federal COVID dollars aside for some of the technology pieces but it is an ongoing challenge,” said Grant.

For the students who live in an area where neither a hotspot or a cradle point will provide sufficient internet access, they are going into school buildings in small groups of five or fewer students in order to complete their school work. Some students are going to a neighbor or family member’s house where internet is available during the school day.

“It is an issue of equity when you think about it. If kids don’t have internet then they don’t have the same access that their peers do,” said Grant.

The Office of the Superintendent of Public Instruction (OSPI) has been using CARES Act funding to help get disadvantaged students connected to the internet but local school districts are finding that those funds are only making a dent in the total costs of connection.

OSPI has been reimbursing districts $10 per hotspot for students that qualify for free and reduced lunch but with the average hotspot costing $40 per month, schools are still having to cover most of the cost. On Oct. 1, OSPI announced a K-12 Internet Access Program which aims to connect low-income families to internet access for free through the 2020-21 school year.

OSPI has designed about $8.8 million toward the K-12 Internet Access Program to help students across the state and has entered into agreements with Comcast, Ziply Fiber and Presidio as the internet service providers.

OSPI’s program can only be utilized by students that did not have internet access before August and are on free and reduced lunch programs.

Walker said a government subsidized broadband network might be the best way to maintain affordable service while expanding it to rural areas.

In Washington state, many of the public utility districts have started to take on the analysis of trying to determine if they can make a feasible project that brings in enough revenue to offset the capitalization. “It’s challenging — without subsidization from the federal government or the state government, it’s nearly impossible,” Walker said.

Walker said there are some subsidization programs out there but they’re not well-funded. There still has to be some creative work put into finding a way to develop more subsidization models.

Walker noted that the amount of internet the average person uses a day is exponentially greater than what was used in past years and it is expected to continue to increase as more people work from home.

The good news is broadband is “future proof,” he said, which means as the bandwidth increases, the infrastructure can keep up with the demand.