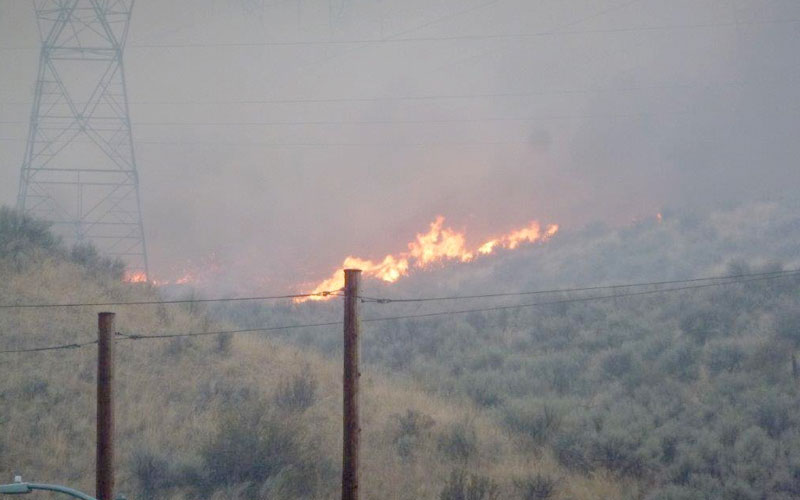 Bridgeport, WA: As fires decimate much of the West Coast and Eastern Washington, it is an all-hands-on-deck emergency to get people, animals, and buildings out of harm’s way of the flames. NoaNet and PUDs are working hard to make sure another thing is protected: the ability to communicate.

In Bridgeport, a small community in north-central Washington near the Colville Indian Reservation, the fires took out three routes of network passing through the community including towers, vaults, pedestals, isolating a large hub, and all of the components that make phone and Internet networks work. These networks carry traffic from all over the state and are critical to keeping information coming in and out of disaster areas for first responders, 911 communications, and for residents to keep in touch with family and friends across the globe.

Douglas PUD, Okanogan PUD, and NoaNet coordinated closely to get critical communication services restored to the area. Within 48 hours of the devastation, Internet and phone services were restored to the area by deploying new equipment, fiber lines, and IT solutions to create a 200-mile bypass route to restore regional services. The hundreds of customers who sent information over the networks in the area were re-routed onto the new bypass route. With countless individuals working around the clock, a process that usually takes months of planning and weeks of deployment was successfully completed into just two exceptionally long and busy days. Cason Parsons, Materials Manager at NoaNet’s statewide Network Operations Center, was one of the people putting in long hours to coordinate equipment and supplies to get the network operational.

“A telecom outage is a really significant event these days. You are aware of how much it is going to affect a lot of people in all kinds of different ways. You’re thinking about the importance of making sure everyone including first responders have cell phone and data service. So, you just keep working. We have to do everything we can to get the communications back up so the people on the ground can do what they need to do.”

Alexander Killingsworth, a NoaNet Field Engineer was on site and said the devastation from the fire was like nothing he had seen before. He noticed his own cell service degrade as nearby equipment burned from the blaze.

“I watched the power go off and the streetlights went out, and then I saw my cell phone service lose a couple of bars. The impacts were happening right in front of my eyes. The guardrails on the side of the road were burnt to a crisp. Everything was burned.”

On the second day of the fire, Killingsworth was able to reach the damaged equipment and replace what was needed to get network components operational again for the bypass route.

There were also network engineers working tirelessly behind computers ensuring that new equipment was being integrated properly and that network traffic was being routed efficiently. Parsons shared, “This was a team effort with dozens of people involved. There was a lot of work that needed to get done and Bridgeport wasn’t the only site impacted by these fires.”

The fires in Eastern Washington are still burning and a thick haze of smoke is covering the State. State health agencies have suggested people stay in their homes to avoid hazardous air. But even in this state of emergency, NoaNet and Washington’s PUDs will continue to work to keep the state’s critical telecommunications infrastructure up and running.